How do we evolve collectively?

Much the same way as for the individual development, there are distinctive and inclusive stages of collective evolution. A good way to express this idea is through a spiral. Psychologists Beck and Cowan have researched the topic of collective evolution and came up with the model of “Spiral Dynamics” (Beck, Don Edward and Cowan, Christopher C. Cowan, Spiral Dynamics, Blackwell, Malden, 2006). In this model, individual stages of evolution are color-coded: 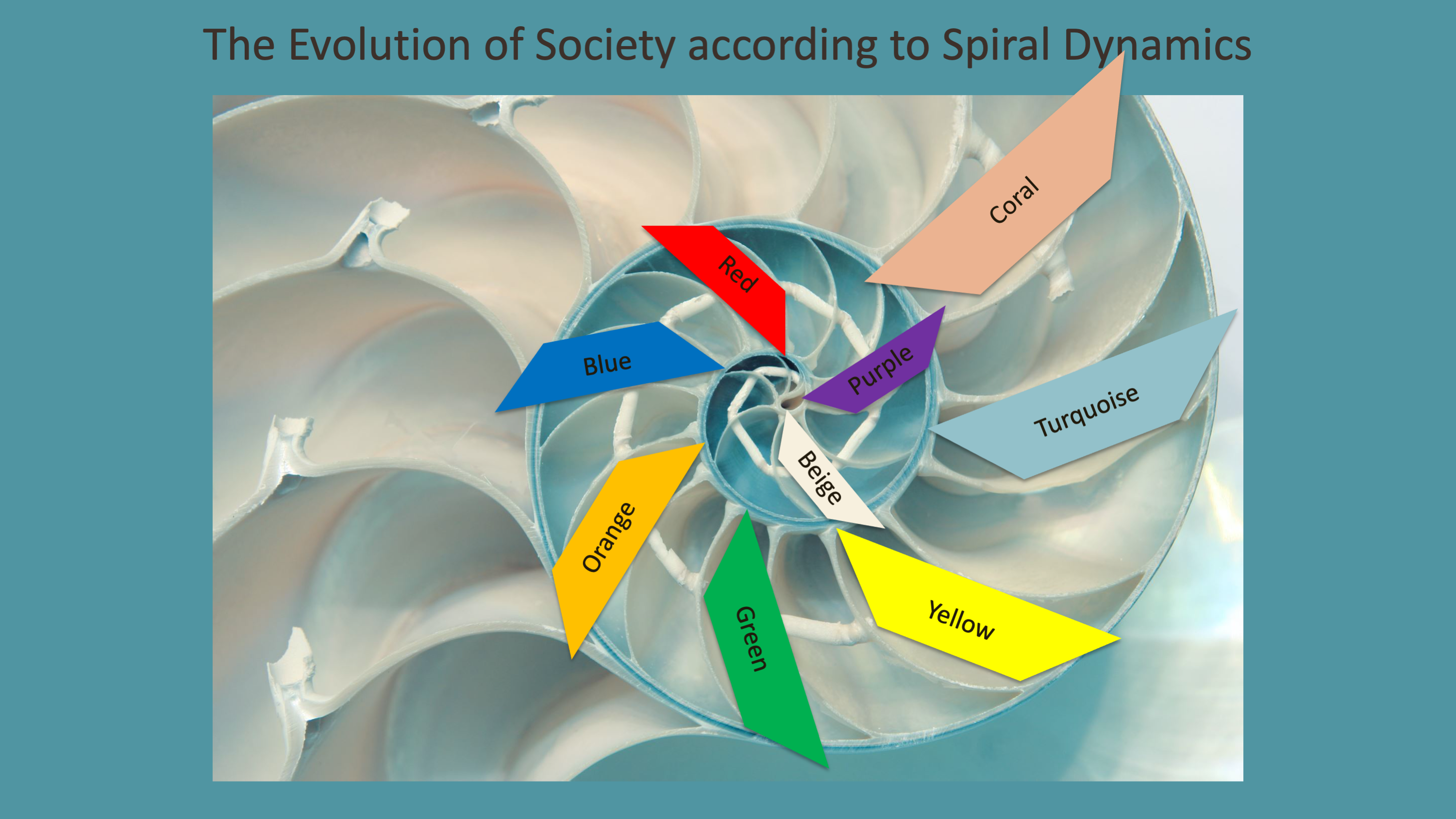 Each of the stages is given certain attributes that encompass typical behavior, morals, ethics and societal organization. Please see the chart for a very brief overview: 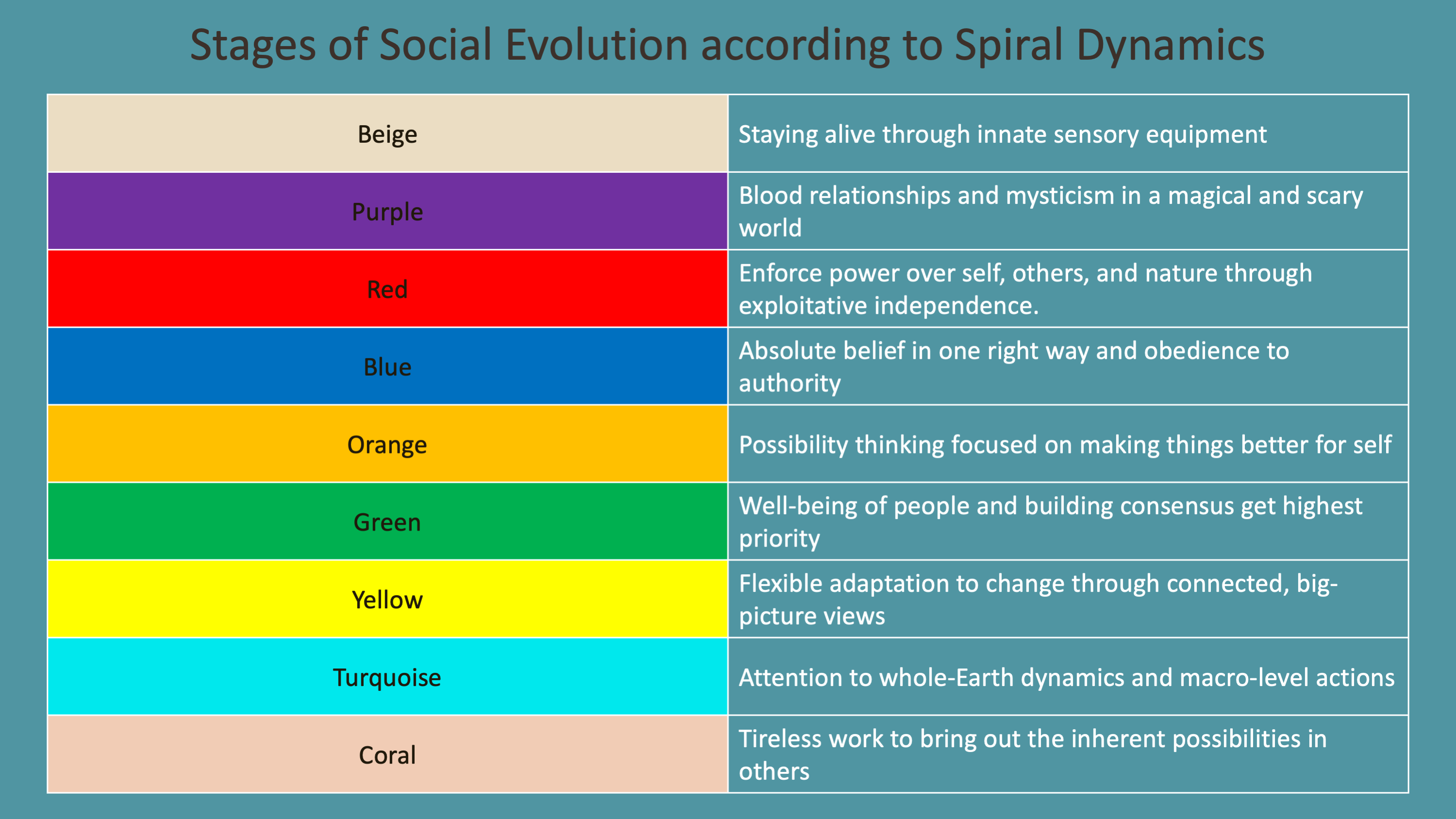 As in individual development, later stages are not better, they are more complex. Behaviors, morals and perspectives of any stage can only be evaluated as fit or unfit in terms of the situation according to life circumstances. The more complex the environment, the more complex the individuals of a society need to be in order to master social challenges. The more related to basic needs a society is, the more important are skills that correspond to initial stages of the spiral. In an ideal society, individuals of different stages can live together in peace because there is a place for every level of evolution. At the same time, experience made obvious that peaceful coexistence depends on people who have enough oversight to balance all these needs in order to keep individuals of any stages healthy and functional and that are able to ensure that the functionality of the society as a whole is never compromised. Individuals who are fit for this task need to have reached a certain level of integration, which is usually said to be the case after the 6th stage (green). The first 6 stages are organized in the so called 1st Tier. Typically, societies going through the 1st Tier are sorting out questions that are connected to basic needs, whereas the 2nd Tier stages (also comprised of 6 stages) are concerned with inter-relationship and are commonly referred to as “integral”. It is also assumed that our Western world is at a stage of collective evolution that needs to start operating from an integral level, if we want to solve our social, economic and environmental problems to the benefit of all.

Much the same as in medicine and psychology, people who are concerned with our collective as well as our individual development have formed a think tank that refers to itself as the “Integral Community”, which goes back to the comparative and philosophical work of Ken Wilber. Wilber analyzed many aspects of development, including spirituality and then came up with the idea that there must be a “Theory of Everything”, which he wrote a book about and is now commonly referred to as “Integral Theory”.

While I highly respect both Wilber’s as well as the work of Beck and Cowan, I found myself confronted with many of the same issues that I have had with medicine and psychology. There is an acute awareness of the shadow, especially in Integral Theory. However, what I was missing were practical tools to overcome the shadow in a systematic manner that proves to be suitable to ensure the health of the collective evolutionary spiral as a whole as well as to make sure that sufficient resources are available to individuals no matter at which developmental stage they are at.

1.1        Parallels between the stages of individual development and collective evolution

When I was discussing emotional maturity, I visualized the stages of emotional development and what they are for in a chart.

These exact same stages can be found in the collective development of a society. Here, I complemented this chart with the corresponding stages of collective evolution: 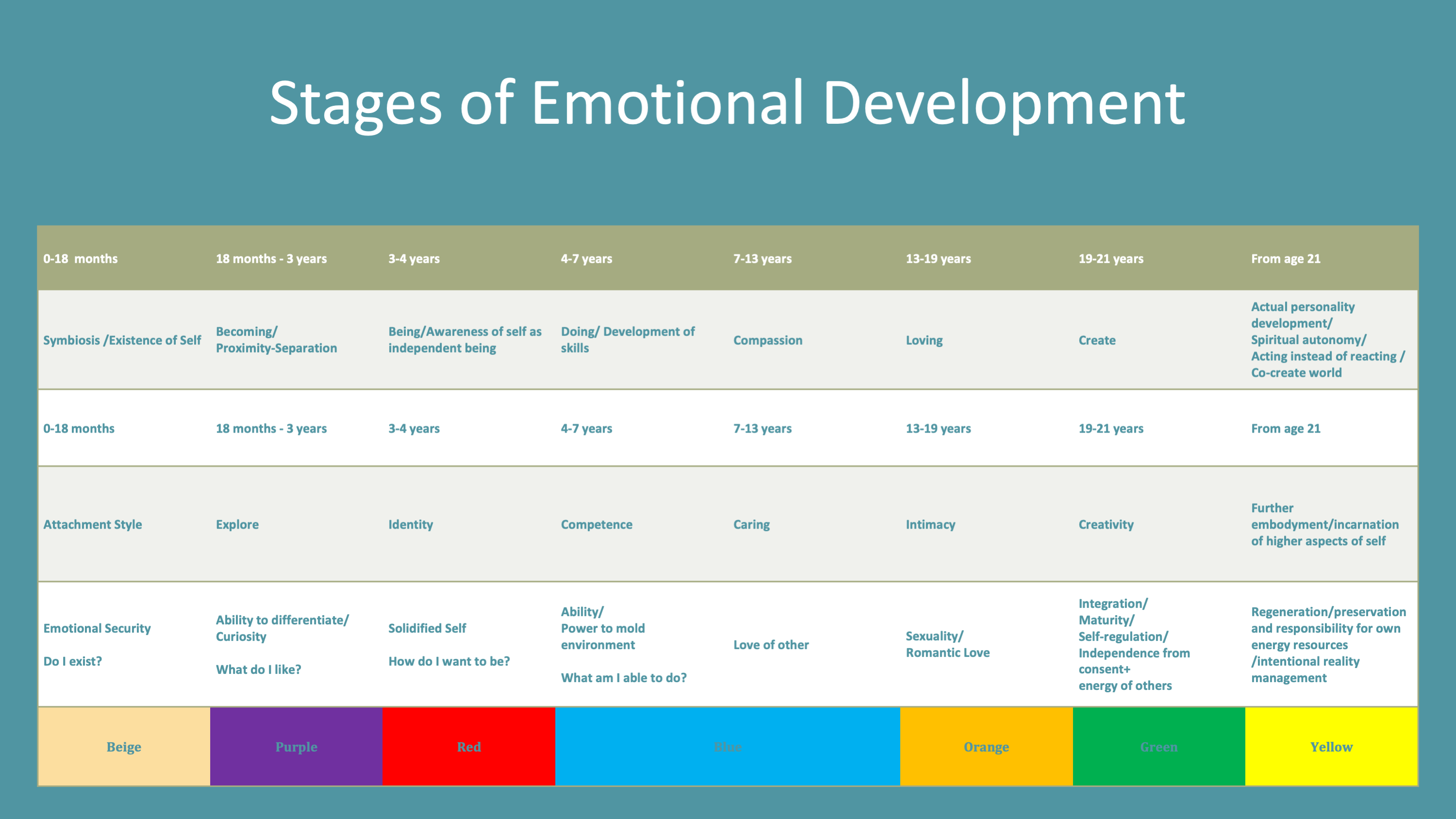 Please remember that emotional maturity is what makes people becoming adults. And that mental development starts for real after emotional maturity has been achieved. In other words, the 1st Tier corresponds the period of growing up, while the 2nd Tier corresponds to adult life. Therefore, it needs to be assumed that the capacity for integral skills can only be reached if there are enough resources to sponsor mental complexity. The resources needed for a healthy evolution of our society will be exact same ones as for the individual development. The intentional and effective management of energy will have to take a center-place in 1st Tier and stay on the agenda throughout the 2nd Tier and beyond – there are infinitely many Tiers to be mastered in the future of humanity. But any other form of resource that is crucial for healthy individual development will need to play a role in societies that want to develop in a healthy way.